Do you wish you could hide your entertainment system in a less obtrusive view, share a Blu-ray player between two rooms or perhaps control your stereo's volume from anywhere in your house? The Cmple Hidden IR Repeater System allows you to use an existing infrared (IR) remote control to operate up to eighteen (18) audio/video (A/V) components located behind cabinet doors, in the rear of a room, in an entertainment cabinet, equipment closet or in a different room. The built-in IR distribution technology gives you the ability to conceal, yet still control bulky electronic equipment such as a cable box, satellite TV receiver, stereo receiver, amplifier, CD player, DVD player, Blu-ray player or virtually any component controlled by an IR signal. 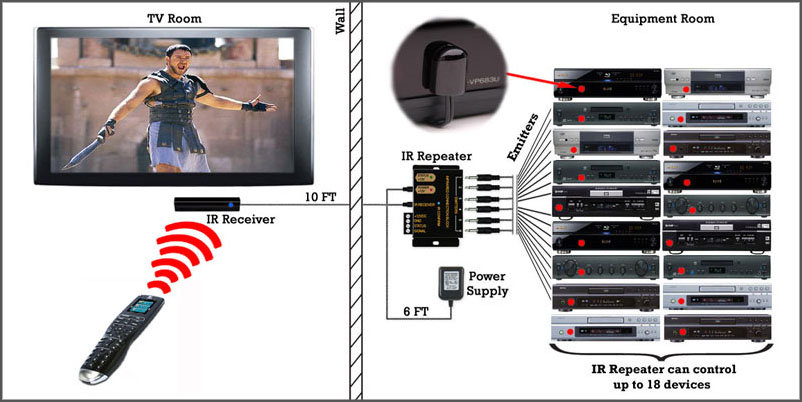 Connecting block provides a place for connecting the IR receivers, emitters, and their respective power requirements. This device supports one IR receiver which is included. Connecting block supports up to six emitters (2 included), which connect into the unit via 3.5 mm mono phone jacks. The Main System Unit, which is the "heart" of an IR extender system, has LED indicators to monitor the IR extender system. Most installations call for the connecting block to be located close to the emitters and the supported components, such as: within a stereo cabinet or hidden out-of-sight in a closet. For convenience connection blocks can be mounted directly to a wall or a shelf with included screws. 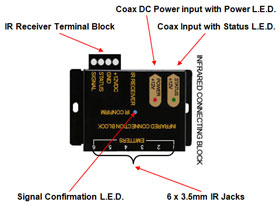 IR Receiver, like the included surface mount model, is the "eye" of the system, which receives IR commands from hand-held remote controls and relays the commands to the Main System Unit. Compact IR receiver is intended for surface mounting on cabinets, TV sets, A/V equipment or on the wall with attached double sided adhesive. Clearly visible system status and IR activity LED’s provide positive feedback to the user.

These small but mighty emitters have a self-adhesive pad that allows them to be stuck directly to the IR sensor window of your AV device, or can be used as a flood for multiple devices when properly mounted. IR transparent, works with existing remote controls and with all models of IR devices like Cable boxes, PVR's, DVR's, DVD players, Blu-Ray players etc. Dual Heads allow you to control multiple pieces of equipment with only one IR output. For use with Connecting Blocks, the mini stick-on emitters include a 10 FT cable between the emitter heads and the mini-plug. 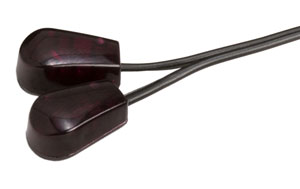 You can link your Hidden IR Repeater system to your A/V equipment in minutes. Just place the Hidden IR repeater box in your equipment cabinet, affix one of the 4 included IR (infrared) emitters to each A/V device's IR window, and mount the IR receiver using the included tape in a location where it can receive your IR remote control's transmitted signals. Place the IR receiver on a TV, shelf or on an exposed part of the cabinet. It does need to be in a direct line of sight from your normal seating position when you'll be using your remote. Use your A/V remote control as usual: the Hidden IR will transmit your command to the correct home theater component, so you'll be able to use your entertainment devices as usual, even though they'll be hidden from view.